At Global Alliance, we take the “Worldwide” in our company name very seriously. We pride ourselves in offering premium limousine services to our clientele not only in our home base of Toronto but around the globe. Through our sophisticated network of trusted worldwide affiliates, Global Alliance can provide professional chauffeured services in hundreds of international cities. We will discuss many of the major worldwide destinations served via our affiliate network on this blog. Our destination today is the elegant, culturally-rich capital of Austria, Vienna.

In addition to being Austria’s capital city, Vienna is the country’s largest metropolitan area. Its metropolitan population is around 2.6 million inhabitants, accounting for approximately a third of the Austrian population. Located in eastern Austria near the borders of Eastern European neighbours (and former imperial subjects in the Austro-Hungarian Empire whose capital it once was) Hungary, the Czech Republic, and Slovakia, Vienna also forms a larger urban conurbation with Slovakia’s capital city of Bratislava that tops 3 million people.

As mentioned, Vienna’s glory days were during its approximately century-long stint as capital of the Habsburg dynasty’s Austro-Hungarian Empire, from the Napoleonic Wars at the start of the 19th Century until the end of World War I in 1918. But its history stretches back millennia to Celtic, Roman, and medieval settlements prior to its 350-year role as de facto capital of the Holy Roman Empire. During this time, Vienna defended itself from Ottoman armies and became a major centre for classical music, which it remains to this day. Vienna was also home to the Vienna Secession art movement led by Gustav Klimt, as well as the birthplace of psychoanalysis through the practice of Sigmund Freud. Its 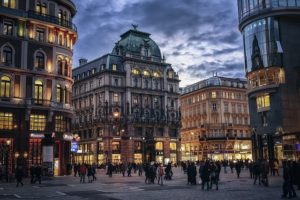 city centre, now a UNESCO World Heritage Site, acquired many magnificent Romanesque, Baroque, Neoclassical, and Art Nouveau buildings during this period, most of them in the core Ringstrasse district.

Vienna today preserves its rich cultural traditions while moving into our contemporary modern world. Many of its august institutions, museums, and architectural highlights can be seen in the Ringstrasse. The former royal palace of the Hofburg is open to the public, as are the adjacent museums of fine art (Kunsthistorisches) and natural history (Naturhistorisches). Many more museums are located in the Museumsquartier. Some of the city’s many other museums are devoted to Freud, Mozart, art fakes, and clocks.

The expansive Schonbrunn Palace, a Habsburg Versailles with over 1,400 rooms, is a popular visitor attraction on the outskirts of the city; its extensive grounds are also home to the world’s oldest zoo. Vienna’s famed State Opera is just one of the city’s many venues that host prestigious musical performances, and the longstanding tradition of Vienna balls (the attendees dancing the legendary Vienna waltz) is preserved in some of the city’s grand palaces. As Austria’s political as well as cultural capital, Vienna is also home to the Austrian Parliament Buildings and also hosts many international organizations and conferences. Vienna is also known for its many parks, numerous former imperial gardens, and grand public spaces.

Vienna International Airport, 18 km from the city centre, is the main air transportation hub for the region, serving an estimated 22 million passengers annually. Vienna’s new Central Railway Station opened in 2014 after nearly a decade of construction and renovation.

Please feel free to contact Global Alliance Worldwide Chauffeured Services for all of your transportation needs in Vienna, Austria.