At Global Alliance, we take the “Worldwide” in our company name very seriously. We pride ourselves in offering premium limousine services to our clientele not only in our home base of Toronto but around the globe. Through our sophisticated network of trusted worldwide affiliates, Global Alliance can provide professional chauffeured services in hundreds of international cities. We will discuss many of the major worldwide destinations served via our affiliate network on this blog. Today we make a stop in one of the world’s true fairytale cities, the historic jewel on the Adriatic, Venice, Italy.

Located in the Veneto region (of which it is the capital) of northeastern Italy, Venice is spread across 118 islands in the shallow Venetian Lagoon. Separate by canals and linked by over 400 bridges, Venice’s lagoon and much of the city is a UNESCO World Heritage Site. Although only 55,000 residents live in the historic city on the islands, Venice has a population of over 264,000 people, with 2.6 million inhabitants in the larger metropolitan area, which includes Padua and Treviso.

Inhabited since the 10th Century BCE, Venice was settled by Romans as well as by later immigrants from around Western Europe. A part of the Eastern Roman Empire along with nearby Ravenna, Venice’s isolation (until modern times, the islands were reachable only by sea) granted it a greater independence. It became one of Italy’s wealthiest and most powerful city-states during the Middle Ages, ruled independently by the lordly Doges and developing into a major mercantile and maritime power in the Mediterranean world. A launching point for the Fourth Crusade, Venice grew as an imperial and cosmopolitan power on the strength of the plunder from Constantinople and continuing trade and naval domination in the region. 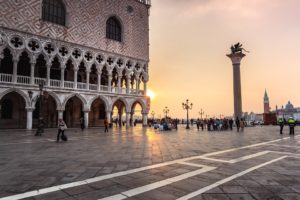 Venice declined after its Renaissance high-point, although it enjoyed a resurgence during the 18th Century as an important cultural centre and popular stop on the aristocratic Grand Tour. Its art and architecture flourished during this period, and great literature and music was produced in and influenced by the city (the composer Antonio Vivaldi hailed from Venice, for instance). Conquered by Napoleon and later under Austro-Hungarian rule, Venice became a part of the unified Kingdom of Italy in 1870, which it remains to this day.

A very popular modern destination for global tourism (as it has been since the days of the 18th Century Grand Tour), Venice attracts between 22 million and 30 million visitors annually. Its famed picturesque canals are plied by any number of small watercraft, most notably the iconic gondola boats. Modern cruise ships dock at the city’s modern port, bringing crowds of visitors. The most popular sites include Piazza San Marco (the location of St. Mark’s Cathedral and the Doge’s Palace), the Grand Canal and Rialto Bridge, and numerous historic and architecturally notable palazzos and churches.

The Lido, an outer sandbar island in the lagoon, is a popular luxury destination, home to the villas of the rich and famous, distinguished hotels, contemporary art galleries, a golf course, two large public beaches, and the prestigious annual Venice Film Festival. The Venice Biennale, which takes place in the city every two years, is a prestigious art exposition, whose organization also runs the Venice Film Festival. The annual Carnival of Venice is well-known for the elaborate, fine masks worn by its participants.

Although it is now accessible by road and rail connections to the mainland, the historic city is car-free, still only navigable by foot or by boat. Water taxis are often utilized in conjunction with limousines to transport passengers to locations within the city centre. In addition to its port (an important commercial shipping port in Italy as well as a passenger port), Venice’s main airport is Marco Polo International on the mainland.

Please feel free to contact Global Alliance Worldwide Chauffeured Services for all of your transportation needs in Venice, Italy.