At Global Alliance, we take the “Worldwide” in our company name very seriously. We pride ourselves in offering premium limousine services to our clientele not only in our home base of Toronto but around the globe. Through our sophisticated network of trusted worldwide affiliates, Global Alliance can provide professional chauffeured services in hundreds of international cities. We will discuss many of the major worldwide destinations served via our affiliate network on this blog. We remain in the state of Oklahoma today to stop by the city of Tulsa.

Tulsa is the second-largest city in Oklahoma and among the top 50 largest cities in the United States. The city’s population is over 403,000, with over a million inhabitants in the larger metropolitan area. Located on the banks of the Arkansas River in the foothills of the Ozark Mountains, Tulsa is consistently ranked among the most livable and growth-friendly cities in the U.S.

The land where Tulsa now stands was Native American land well into the 19th Century (and much of it still is down to today), and was settled by the Lochapoka and Creek tribes in 1836. The historic Creek Council Oak Tree site in modern downtown Tulsa was the core of this small settlement, making Tulsa (a name derived from the Creek word for “old town”) one of the few major U.S. cities not founded by settlers of European descent. Officially incorporated in 1898, Tulsa began to grow rapidly soon after the first discovery of oil in the region in 1901, its boomtown population swelling to over 180,000 by 1909. Known throughout the 20th Century as “the Oil Capital of the World”, Tulsa was a major stop on Route 66 highway linking 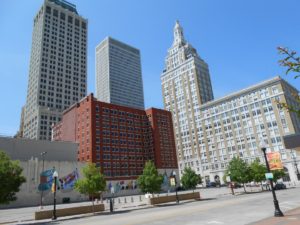 Chicago and Los Angeles (indeed, a local businessman was a key champion of the highway, and the city became known as the “Birthplace of Route 66”). Though the city declined in the 1970s and 1980s as gas prices fell, city leaders were sure to expand Tulsa’s economy in other sectors subsequently.

Tulsa is known for its distinctive Art Deco architecture, visible in many of its older core neighbourhoods built during the city’s early-20th-century boom. The BOK Tower skyscraper, opened in 1976, is an architectural icon of another era, and is one of the tallest buildings in the Great Plains states. The new BOK Center is Tulsa’s purpose-built new arena for its minor-professional sports teams. Tulsa is home to two major universities, the University of Tulsa and Oral Roberts University; Tulsa’s Golden Hurricanes college football and basketball teams have had much post-season success, while Oral Roberts is an Evangelical Christian university whose campus is noted for its futurist architecture.

Tulsa is home to many fine museums, including the Philbrook Museum of Art (which, in addition to its fine art collection, is also a historic home with formal gardens), the Gilcrease Museum, and the Woody Guthrie Center. It is also a center for the performing arts, and Tulsa Zoo is a well-rated zoological gardens in the city. Tulsa International Airport serves over 3 million passengers per year.

Please feel free to contact Global Alliance Worldwide Chauffeured Services for all of your transportation needs in Tulsa, Oklahoma.