At Global Alliance, we take the “Worldwide” in our company name very seriously. We pride ourselves in offering premium limousine services to our clientele not only in our home base of Toronto but around the globe. Through our sophisticated network of trusted worldwide affiliates, Global Alliance can provide professional chauffeured services in hundreds of international cities. We will discuss many of the major worldwide destinations served via our affiliate network on this blog. Today we visit Israel’s modern urban hub and second-largest city, Tel Aviv.

Tel Aviv is Israel’s second-largest city, with over 438,000 residents and over 1.3 million in the larger metropolitan area. Originating from neighbourhoods in the then-Arab-majority port city of Jaffa settled by Jewish immigrants in the 1880s, Tel Aviv was officially founded as a separate city outside of Jaffa in 1909. The urban planning of Tel Aviv was laid out on the latest principles, influenced by the Garden City movement, but early development was briefly suspended when Arab and Jewish residents were expelled by the then-Ottoman authorities in the waning days of World War I.

Returning in the early 1920s under the British mandate, Tel Aviv’s residents continued to expand the 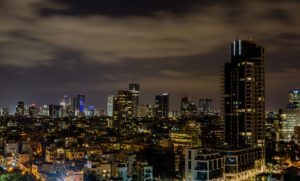 city, especially with increased European refugee immigration in the 1930s. One of the major cities in the newly-established state of Israel in 1947, Tel Aviv and Jaffa were unified in 1949. Through a half-century of conflict and upheaval, Tel Aviv has continue to grow to the cusp of global city status.

Modern Tel Aviv is noted for its secular and liberal attitudes, lively nightlife and 24-hour culture, and architectural noteworthiness. Tel Aviv’s White City, approximately 4,000 buildings in the Bauhaus or International styles favoured by European Jewish architects who emigrated in the 1930s, has been designated a UNESCO World Heritage Site and is a popular architectural tour stop-off. Other landmarks include the Great Synagogue (dating from the 1930s), numerous museums and performing arts theatres, and modern skyscrapers and towers. Tel Aviv is also home to many national embassies, although Jerusalem is Israel’s capital city. Ben Gurion Airport is Tel Aviv’s main airport, averaging around 14 million passengers a year.

Please feel free to contact Global Alliance Worldwide Chauffeured Services for all of your transportation needs in Tel Aviv, Israel.