At Global Alliance, we take the “Worldwide” in our company name very seriously. We pride ourselves in offering premium limousine services to our clientele not only in our home base of Toronto but around the globe. Through our sophisticated network of trusted worldwide affiliates, Global Alliance can provide professional chauffeured services in hundreds of international cities. We will discuss many of the major worldwide destinations served via our affiliate network on this blog. We drop into the sunny south of Spain today to visit the city of Seville.

Located in the autonomous community of Andalusia within the larger nation of Spain, Seville is Andalusia’s capital and largest city. Its 1.5 million metropolitan inhabitants also makes it Spain’s fourth-largest city and places it in the top 30 of the European Union’s largest metro areas.

Seville’s founding dates back to Roman times, when it was known as Hispalis. From the 8th Century to the middle of the 13th Century, Seville was under Muslim rule along with most of Spain. After the beginning of Spain’s empire in the Americas post-1492, Seville’s location on the plain of the river Guadalquivir made it the sole port for colonial goods from across the Atlantic, the trade monopoly turning it into one of Spain’s key economic engines during the nation’s Golden Age. Although Seville’s fortunes later declined due to a number of factors, including the silting-up of the Guadalquivir and the opening of the port of Cadiz to transatlantic trade, the city saw a rich renewal with major new public spaces, infrastructure, and landmarks being built for international expositions held in the city in 1929 and 1992.

Seville today retains a rich architectural and cultural heritage along with contemporary touches. Seville’s Old City includes three UNESCO World Heritage Sites, practically adjacent to each other: the Alcazar of Seville, a magnificent medieval royal palace complex in the mudejar style; the Seville Cathedral, the third-largest church and the largest Gothic cathedral in the world, with its iconic bell tower (and former Islamic minaret) the Giralda; and the General Archive of the Indies, a Spanish Renaissance building housing valuable records of the Spanish colonial empire. Other historic landmarks include the Torre 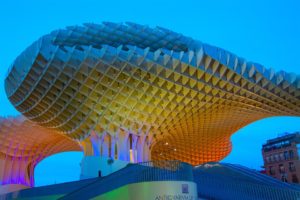 del Oro (a former watchtower and prison on the banks of the Guadalquivir), the Royal Tobacco Factory (once the second-largest building in Spain and setting for the opera Carmen), the Triana Bridge, and the historic bullfighting ring of the Maestranza. Seville’s historic Jewish and Moorish quarters were the womb of the distinctive Andalusian dancing form of flamenco, and the Old City is known for its plethora of popular tapas bars.

Modern landmarks in Seville include the former grounds of the 1929 Ibero-American Exposition, comprising the Plaza de Espana, Maria Luisa Park, and Alfonso XIII Hotel; the island of La Cartuja, where the 1992 Expo was held and now the location of a technological development area and an amusement park, Isla Magica; and the Metropol Parasol, completed in 2011 as the world’s largest timber-framed structure. Sevilla FC and Real Betis are the city’s two major football clubs, with the former having greater success.

Please feel free to contact Global Alliance Worldwide Chauffeured Services for all of your transportation needs in Seville, Spain.