At Global Alliance, we take the “Worldwide” in our company name very seriously. We pride ourselves in offering premium limousine services to our clientele not only in our home base of Toronto but around the globe. Through our sophisticated network of trusted worldwide affiliates, Global Alliance can provide professional chauffeured services in hundreds of international cities. We will discuss many of the major worldwide destinations served via our affiliate network on this blog. Today, we visit New Mexico’s historic capital city of Santa Fe.

The fourth-largest city in the state, Santa Fe has a city population of over 80,000 inhabitants, with more than 144,000 residents in the larger metropolitan area. Santa Fe is often included in a wider combined statistical area with the larger nearby adjacent cities of Albuquerque and Las Vegas, a largely contiguous metro area of over 1.1 million people.

Founded by the Spanish in 1610 (following centuries of settled Native American residency and just over a decade of Spanish colonial presence prior to the official founding), Santa Fe is the New Mexico’s oldest city and one of the oldest state capitals in the United States. It was the capital of its province in New Spain, then of a Mexican territory, then of an American territory, and then finally of the new state of New Mexico in 1912. Bypassed 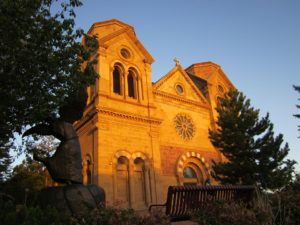 by major railway lines constructed through the region in the late 19th Century, Santa Fe made a virtue of its limited growth by designing and enacting a city plan to preserve historical streets and buildings. This harmonious approach to urban planning, emphasizing the historic central plaza and Spanish Pueblo Revival architecture, combined with its warm and dry climate and unique cultural heritage, made Santa Fe a popular destination for retirees and especially for artists.

Art remains a key attraction in Santa Fe, which is home to a large community of artists and as a result is one of the major art markets in the United States. Art museums in Santa Fe include the New Mexico Museum of Art, the Museum of Contemporary Native Arts, and the Georgia O’Keeffe Museum. Santa Fe’s historic sites include the Spanish colonial-era Palace of the Governors and numerous historic Pueblo-style churches, chapels, and missions. Santa Fe’s primary airport is Santa Fe Municipal Airport, although many visitors to the city fly into Albuquerque, which is an hour’s drive away.