At Global Alliance, we take the “Worldwide” in our company name very seriously. We pride ourselves in offering premium limousine services to our clientele not only in our home base of Toronto but around the globe. Through our sophisticated network of trusted worldwide affiliates, Global Alliance can provide professional chauffeured services in hundreds of international cities. We will discuss many of the major worldwide destinations served via our affiliate network on this blog. Today’s stop is in the great western state of Utah and its capital and largest city, Salt Lake City.

Salt Lake City’s metropolitan population is a little over one million, with over 2.5 million inhabitants in the larger urban-suburban region which includes the adjacent communities of Ogden and Provo. Originally known as Great Salt Lake City after the nearby Great Salt Lake, Salt Lake City was founded by Mormon settlers, including their celebrated leader Brigham Young (for whom Brigham Young University in Provo is named), in 1847. Made the territorial and later the state capital, Salt Lake City grew with the coming of the transcontinental railroad, ther Gold Rush, and a sustained mining boom.

Today, Salt Lake City is a national centre of industrial banking and a major railroad freight hub with important connections to mining companies and energy corporations. The city is a popular location for conventions and has a thriving tourist trade, much of which is focused on winter recreation. Ski resorts dot the nearby Wasatch Mountains, and the winter sporting facilities that are the legacy of the 2002 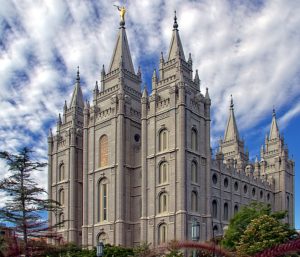 Salt Lake City’s central core is focused on Temple Square, where the grand Salt Lake Temple of the Church of Jesus Christ of Latter-Day Saints (which is also headquartered in the city) is located. It was begun soon after the city’s founding and dedicated after 40 years of construction in 1893. Museums related to the LDS Church are also clustered around the square, and the city is home to many other museums, performing arts centres, and cultural institutions.

Salt Lake City’s sole major professional sports team is the Utah Jazz of the National Basketball Association, but the metro area is also home to Major League Soccer’s Real Salt Lake, who play their home games in the suburb of Sandy. Salt Lake City International Airport is the city’s main air transport hub, and a key regional hub for Delta Airlines. It is among the top 25 busiest airports in the United States.