At Global Alliance, we take the “Worldwide” in our company name very seriously. We pride ourselves in offering premium limousine services to our clientele not only in our home base of Toronto but around the globe. Through our sophisticated network of trusted worldwide affiliates, Global Alliance can provide professional chauffeured services in hundreds of international cities. We will discuss many of the major worldwide destinations served via our affiliate network on this blog. We head to the Pacific Northwest today, to visit Oregon’s largest city, Portland.

With a city population of over 630,000 residents and over 2.4 million inhabitants of its larger metropolitan area, Portland is not only Oregon’s largest city (and the location of 60% of the state’s population) but ranked in the top 30 largest cities and metro areas in the United States. Portland is named after the city in the state of Maine on the opposite side of the country, and is often called the City of Roses due to its ideal rose-growing climate.

First settled as the end point of the Oregon Trail in the 1830s, Portland was founded on the banks of the Willamette River, in the Valley of the same name. With its access to the Pacific Ocean via the Columbia River and preponderance of lumber, Portland became a major logging centre in the West and a busy and gritty port city. Nursing an unsavoury reputation for decades, Portland began to emerge economically with a major manufacturing boom during the Second World War. It also became a progressive and countercultural centre after the 1960s, known for social activism, minority rights, and 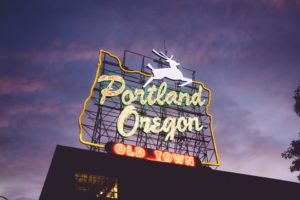 Thanks to its unique commission-based urban planning, Portland is today a model of livability, walkability, cycle-ability, land use, and public transportation. Its downtown straddles the Willamette River, and the central city is defined by the numerous bridges spanning the river, several of which are historic landmarks. Portland is home to numerous historic and contemporary film and performing arts theatres, as well as major museums such as the Oregon Museum of Science and Industry, the Oregon History Museum, and the Portland Art Museum. Portland’s city parks system is considered one of the best in the United States.

Portland has two major league and one major junior sports franchises: the Portland Trail Blazers of the National Basketball Association and the Portland Timbers of Major League Soccer, as well as the Western Hockey League’s Portland Winterhawks. The Blazers and Winterhawks play at the Moda Center in downtown, while the Timbers play at Providence Park. Portland International Airport, also known by its airport code PDX (sometimes used colloquially to refer to the city as a whole), is the city’s main air travel hub.

Please feel free to contact Global Alliance Worldwide Chauffeured Services for all of your transportation needs in Portland, Oregon.