At Global Alliance, we take the “Worldwide” in our company name very seriously. We pride ourselves in offering premium limousine services to our clientele not only in our home base of Toronto but around the globe. Through our sophisticated network of trusted worldwide affiliates, Global Alliance can provide professional chauffeured services in hundreds of international cities. We will discuss many of the major worldwide destinations served via our affiliate network on this blog. Today we visit the popular desert oasis of Palm Springs, California.

A bustling resort city and retirement community located in the Coachella Valley about 100 miles (or about 170 kilometres) east of Los Angeles, Palm Springs was incorporated in 1938 and currently has a population of over 47,000. The Valley was historically inhabited by the Cahuilla Indians, later visited by explorers out of Mexico, and eventually settled by European-Americans starting in the 1860s. Due to its attractive winter-time dry heat and mountain-sheltered microclimate, Palm Springs developed into a fashionable resort beginning in the early years of 20th Century, attracting California’s wealthy elite including numerous Hollywood stars.

A multitude of hotels and resorts were built in the area (which is sometimes called the Desert Empire) between 1880s and the 1940s, many of which survive today. Palm Springs is more generally renowned for its notable mid-century modern architecture, designed by American architectural luminaries such as Frank Lloyd Wright and Richard Neutra. Palm Springs is also home to many museums, art galleries, and cultural attractions, as well as a plethora of public art around the city, especially in the downtown neighbourhood known locally as the Village. 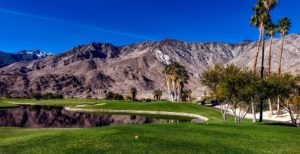 Recreation and relaxation in amenable weather are the area’s true draws for visitors, with golf (the Coachella Valley boasts more golf courses than any other region in the state), tennis, swimming, and outdoor activities such as hiking and biking among its most popular pastimes. Once predominantly a winter destination, Palm Springs now attracts visitors year-round. Major festivals and events that brings in the crowds include the star-studded Palm Springs International Film Festival in January and the Coachella Valley Music and Arts Festival in nearby Indio, held over three weekends every April. The latter event, frequently known as simply Coachella, is one of the largest, best-known, and best-attended popular music festivals in the United States and indeed in the world, attracting a quarter of a million attendees this year.

Palm Springs International Airport (PSP), located a mere two miles east of downtown Palm Springs, is the Coachella Valley’s primary air transport hub. Though flights in and out of the airport are usually seasonal in nature, with more operating in the winter months, PSP welcomes around 2 million passengers per year.

Please feel free to contact Global Alliance Worldwide Chauffeured Services for all of your transportation needs in Palm Springs, California.