At Global Alliance, we take the “Worldwide” in our company name very seriously. We pride ourselves in offering premium limousine services to our clientele not only in our home base of Toronto but around the globe. Through our sophisticated network of trusted worldwide affiliates, Global Alliance can provide professional chauffeured services in hundreds of international cities. We will discuss many of the major worldwide destinations served via our affiliate network on this blog. Today, we stop in to the capital and largest city of the Scandinavian country of Norway, Oslo.

First made a capital in the year 1300, Oslo’s history stretches back at least as far back as its founding in 1040, according to the Norse sagas. Archaeological evidence indicates settlement in the region may predate AD 1000, however. A provincial backwoods for many centuries that was frequently destroyed by fire, Oslo was nonetheless the core town in Norway through political and social changes, among them the country’s status as the junior partner in political unions with Denmark and later Sweden.

During the Danish years in the 1600s under the reign of Christian IV of Denmark, a new city was ordered to be built away from the often-razed Old City, and this became known as Christiania after the 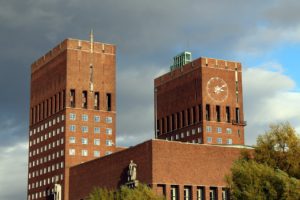 Danish monarch. Retaining this name until reverting to the Norwegian name of Oslo in 1925, the city gained many much-needed institutional buildings as the capital of a newly independent kingdom in the 19th Century, including the University of Oslo, the Bank of Norway, the Royal Palace, and the Parliament buildings (the Storting), all of which still stand as among the city’s chief historic sites.

A town of a mere 10,000 inhabitants in 1814, Oslo (then Christiania) counted 230,00 inhabitants by 1900, and today has a fast-growing metropolitan population of over 1.7 million. Norway’s economic, governmental, financial, and cultural centre, Oslo is also a major global centre for shipping and the maritime industry. As Norway is now a major oil-producing country, Oslo’s modern economy is also geared towards the energy sector.

Located on the shores of a long fjord, Oslo features many museums of Norwegian history and culture, grand performing arts centres (including the historic Christiania Theatre and the modern waterfront Oslo Opera House), and parks and green spaces. Oslo is served by two airports, with Gardermoen (Europe’s sixth largest airport) as the main international gateway and the more remote Torp Airport handling lower-cost airlines.

Please feel free to contact Global Alliance Worldwide Chauffeured Services for all of your transportation needs in Oslo, Norway.