At Global Alliance, we take the “Worldwide” in our company name very seriously. We pride ourselves in offering premium limousine services to our clientele not only in our home base of Toronto but around the globe. Through our sophisticated network of trusted worldwide affiliates, Global Alliance can provide professional chauffeured services in hundreds of international cities. We will discuss many of the major worldwide destinations served via our affiliate network on this blog. Today, we visit the tourism hub of central Florida, Orlando.

As a metropolitan area of over 2.3 million inhabitants, Orlando is Florida’s third-largest metro region, the sixth-largest in the American South, and ranks in the top 25 largest metro areas in the United States. Located in central Florida (it is the state’s largest inland city) in a region of wetlands and lakes, the most notable of which are Lake Apopka (the largest in the area) and Lake Eola, whose mid-lake fountain is an iconic civic landmark. Orlando’s downtown, with its handful of skyscrapers, is located 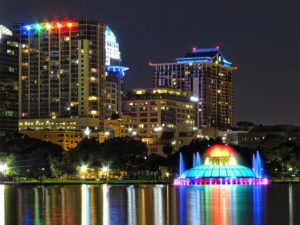 near Lake Eola as is the city’s historic district, though the larger metro area takes on a spread-out checkerboard pattern of neighbourhoods and communities.

A small backwater community until after the American Civil War, Orlando became prosperous as the hub of Florida’s citrus-growing industry from its incorporation as a town in 1875 (it was incorporated as a city a decade later) and about 1895. Growing in size through the early 20th Century, Orlando was largely defined as a military town due to the U.S Army and Air Force bases in the vicinity; one of these air bases saw its runways repurposed for commercial flight, forming the precursor to the city’s major airport today, Orlando International Airport (MCO). This all changed in the 1960s, when Walt Disney World was built in the area (it opened in 1971), inaugurating a theme park boom that transformed Orlando into one of the premier tourist destinations in the United States, sometimes referred to as the Magic Kingdom after a Walt Disney World nickname.

Theme park tourism remains Orlando’s major economic driver today. 7 of the 10 most-visited amusement parks in the U.S. are in the Orlando area. In addition to Walt Disney World and Epcot Center and its various connected parks and resorts, the major theme park complexes are Universal Orlando and SeaWorld Orlando, with a seemingly endless number of smaller parks and attractions throughout the Orlando area. Orlando has two major professional sports franchises to attract local and out-of-town patrons as well: the Orlando Magic of the National Basketball Association and Major League Soccer’s Orlando City SC.

Orlando also vies with Chicago and Las Vegas as the country’s most popular convention destination. The Orange County Convention Centre, a 2-million-square-foot exhibition and meeting facility, is the second-largest convention space in the United States. High tech industry is an expanding economic factor in Orlando as well.

Please feel free to contact Global Alliance Worldwide Chauffeured Services for all of your transportation needs in Orlando, Florida.