At Global Alliance, we take the “Worldwide” in our company name very seriously. We pride ourselves in offering premium limousine services to our clientele not only in our home base of Toronto but around the globe. Through our sophisticated network of trusted worldwide affiliates, Global Alliance can provide professional chauffeured services in hundreds of international cities. We will discuss many of the major worldwide destinations served via our affiliate network on this blog. Today we visit Oklahoma City, the capital and largest city in the state of Oklahoma.

First settled in 1889, Oklahoma City’s population had doubled by 1900. Oklahoma City became state capital soon after statehood in 1907, as the state’s commercial, transportation, and governmental hub through the 20th Century up to today. A key stop along the famous Route 66 and later the I-35 highway corridor, Oklahoma City developed one of America’s largest livestock markets and is also the location of major energy industry (oil, natural gas, petroleum products; numerous oil derricks are located within the city limits, and even on the grounds of the Oklahoma State Capitol). Major investment in urban redevelopment in the 1990s added numerous new civic and commercial structures to Oklahoma City, including in the 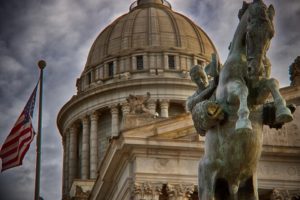 Part of the ’90s redevelopment, known as the Pei Plan, was a handsome new downtown landmark, the Myriad Botanical Gardens and Crystal Bridge. Other landmarks include the Oklahoma City Zoo and Botanical Gardens, the Oklahoma City Museum of Art, and the National Cowboy & Western Heritage Museum. The 844-foot Devon Energy Centre office tower in Oklahoma City’s downtown is the tallest building in the state. Will Rogers World Airport, named for the Oklahoma-native star of stage and screen, is the city’s primary air transport hub.

While Oklahoma city is home to numerous high school, college, and minor league sports team, their only major-league professional franchise is the Oklahoma City Thunder of the National Basketball Association (NBA), who play at the Chesapeake Energy Arena in downtown. Originally the Seattle Supersonics, the Thunder moved to Oklahoma City in 2008 and were renamed in reference to the area’s notoriety as a location of frequent extreme weather (“Tornado Alley” is a nickname for the region). This move followed the successful yet temporary relocation of the New Orleans Hornets to Oklahoma City for two seasons following Hurricane Katrina; although the Hornets (now the Pelicans) moved back to New Orleans in 2008, Oklahoma City’s hosting of the franchise showed it to be a viable NBA market, and the Thunder move immediately followed.

Please feel free to contact Global Alliance Worldwide Chauffeured Services for all of your transportation needs in Oklahoma City, Oklahoma.