At Global Alliance, we take the “Worldwide” in our company name very seriously. We pride ourselves in offering premium limousine services to our clientele not only in our home base of Toronto but around the globe. Through our sophisticated network of trusted worldwide affiliates, Global Alliance can provide professional chauffeured services in hundreds of international cities. We will discuss many of the major worldwide destinations served via our affiliate network on this blog. Today, we visit the capital of Belarus, Minsk.

Belarus’ largest city as well as its capital, Minsk’s urban area has an estimated population of just over 2 million residents. A special administrative area within the country as well as the administrative capital of the post-USSR association the Commonwealth of Independent States, Minsk’s history goes back to its generally-agreed-upon founding date of 1067. An important principality in the Middle Ages and later part of the Grand Duchy of 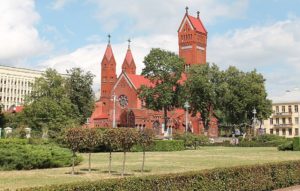 Lithuania and the Polish-Lithuanian Commonwealth, Minsk was battled over by Poland and Russia for over a century before finally being annexed to Russia in 1793. Minsk grew as an important trading, manufacturing, and cultural centre through the 19th Century, then was a key regional capital during the Soviet Union in the 20th Century. Minsk has expanded and modernized since Belarus became independent in 1990, and celebrated 940 years since its founding in 2007.

The economic, industrial, and educational centre of Belarus as well as its administrative capital, Minsk is also a cultural hub, with numerous theatres, dozens of cinemas, museums and historic churches, and over 100 libraries in the city. Minsk is home to multiple sports franchises, including the major Dinamo Minsk, which runs teams in the most popular team sports in the country, football and hockey. Minsk was the host city of the IIHF World Hockey Championship in 2014, and will host the Olympics-style European Games in 2019.

Minsk National Airport, opened in 1982, is the main international airport for the city, while Minsk-Passazhyrski is the main railway station, one of the most modern in the former U.S.S.R.

Please feel free to contact Global Alliance Worldwide Chauffeured Services for all of your transportation needs in Minsk, Belarus.