At Global Alliance, we take the “Worldwide” in our company name very seriously. We pride ourselves in offering premium limousine services to our clientele not only in our home base of Toronto but around the globe. Through our sophisticated network of trusted worldwide affiliates, Global Alliance can provide professional chauffeured services in hundreds of international cities. We will discuss many of the major worldwide destinations served via our affiliate network on this blog. Today we visit the fifth largest city in the Midwest, Milwaukee, Wisconsin.

With a city population of over 600,000 and over 2 million residents in the larger metropolitan area, Milwaukee is the largest city in the state of Wisconsin and the 31st largest in the United States. Inhabited by American Indian tribes and traversed by French fur traders prior to its initial founding as a European settlement by French-Canadian trailblazer Solomon Juneau in 1818, Milwaukee grew through the middle decades of the 19th Century, with German immigration being particularly strong. Although other ethnic groups flocked to settle in the growing city, Polish immigrants most prominent among them, the German-American community of Milwaukee was the city’s most important for many years. German cultural identity remains a key component of Milwaukee, from its annual Oktoberfest to the august traditions of its successful brewing industry.

Milwaukee’s past is imprinted on its historic neighbourhoods, whose vitality has survived Rust Belt industrial decline better than many Midwestern cities and even seen significant growth and renewal in recent decades. Milwaukee has retained a strong manufacturing base while diversifying its urban economy. Located on the western shore of Lake Michigan, Milwaukee is also spread along the banks of the river which shares its name, where much new residential and commercial development has taken 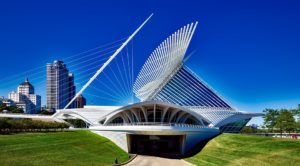 Milwaukee’s cultural and recreational attractions include the Milwaukee Art Museum, the Milwaukee Public Museum, the historic mansions of “Grand Avenue” (including the Pabst Mansion, now open to the public as a house museum), the Mitchell Park Horticultural Conservatory (known as “the Domes” for the three glass domes that contain a variety of plant life from around the world), and the Harley-Davidson Museum (the famed motorcycle manufacturer is one of six Fortune 500 companies based in the city).

Milwaukee is home to two major professional sports teams. The Milwaukee Brewers of Major League Baseball play at Miller Park in the city’s inner suburbs, while the Milwaukee Bucks of the National Basketball Association play at the BMO Harris Bradley Center downtown. College sports are also prominent in Milwaukee, with the city’s major post-secondary educational institutions Marquette University and the University of Wisconsin-Milwaukee both boasting campuses in the city.

Please feel free to contact Global Alliance Worldwide Chauffeured Services for all of your transportation needs in Milwaukee, Wisconsin.