At Global Alliance, we take the “Worldwide” in our company name very seriously. We pride ourselves in offering premium limousine services to our clientele not only in our home base of Toronto but around the globe. Through our sophisticated network of trusted worldwide affiliates, Global Alliance can provide professional chauffeured services in hundreds of international cities. We will discuss many of the major worldwide destinations served via our affiliate network on this blog. Today, we visit the second-largest metropolis in the United Kingdom, Manchester.

With a city population of over 530,000 and an urban population of 2.55 million inhabitants, Manchester is the second-largest metropolitan area in the UK after London and consistent competitor with Birmingham for the title of the country’s “second city”.

The site of a Celtic stronghold, Roman fort, and medieval manorial township with market and parish church, Manchester began to develop its textile industry as early as the 14th century, becoming a major centre for the manufacture and trade of woollen and linen products in the north of England by the mid-16th century. This industry exploded in productivity and profitability with the Industrial Revolution and important transportation upgrades and advances prior to the 19th Century, turning Manchester into one of the country’s major industrial centres (called “Cottonopolis” or “Warehouse City”) by the Victorian Era. Manchester’s golden age was in the late 1800s, when many of its major public buildings were constructed and opened.

Affected by industrial decline, changes in shipping, and the Blitz in World War II, Manchester’s profile shifted in the latter half of the 20th Century. Major urban renewal efforts and construction campaigns, as well as initiatives emphasizing culture (Manchester had one of the UK’s most exciting music scenes through the 1980s and 1990s) and major events such as the Commonwealth Games in 2002, transformed Manchester into a vibrant, diverse, modern British city. 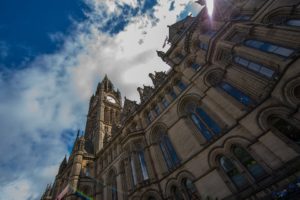 Manchester’s landmarks include its Cathedral, which began as a parish church built in 1421 on the hilltop site of the old Celtic fortification and has been extensively built up and refurbished over the centuries since. Manchester Town Hall is one of the city’s architectural highlights; located in Albert Square and completed in 1877 at the height of Manchester’s wealth, the Town Hall is an excellent example of the Gothic Revival style. Modern skyscrapers – including the 47-storey Beetham Tower, the tallest building in the UK outside of London – provide a contrast in building styles. The core of the city is marked by numerous public squares, shopping thoroughfares, monuments, and historic buildings. The 610-acre Heaton Park in the north of the city is the one of the largest municipal parks in Europe.

Manchester is also famous for its winning football clubs. Manchester United, who play their games at the storied stadium (and largest football ground in the UK) at Old Trafford, have won more league titles than any other English club, numerous domestic and European trophies, and have one of the largest followings of any football club in the world. Manchester City is also a major club in the city, having won two Premier League titles in the past decade. Manchester has also hosted numerous international sporting competitions, including many international football championships in its major stadiums.

In addition to Manchester’s status as a major hub in the UK’s rail network, Manchester Airport is the third-busiest in the country and the largest outside of Greater London.

Please feel free to contact Global Alliance Worldwide Chauffeured Services for all of your transportation needs in Manchester, UK.