At Global Alliance, we take the “Worldwide” in our company name very seriously. We pride ourselves in offering premium limousine services to our clientele not only in our home base of Toronto but around the globe. Through our sophisticated network of trusted worldwide affiliates, Global Alliance can provide professional chauffeured services in hundreds of international cities. We will discuss many of the major worldwide destinations served via our affiliate network on this blog. Our third consecutive visit to the United Kingdom takes us to the port city of Liverpool.

Located in the northwest of England on the estuary of the River Mersey, Liverpool has a city population of over 480,000, with a metropolitan population of over 2.2 million. With its name deriving from earlier English words for “muddy creek”, Liverpool was officially founded via royal letters patent from King John in 1207. Long a small settlement in the Mersey Estuary region, Liverpool began to develop as the area’s primary port in the late 17th and early 18th centuries, displacing the former Roman city of Chester when its river began to silt up.

With trade with the West Indies and other New World colonies increasing through its ports, Liverpool grew as a commercial juggernaut through the 18th and 19th centuries, surpassing even London in wealth and international immigration at times. Labour unrest, economic shifts, and WWII bombing damage slowed and redirected Liverpool’s development through the 20th Century. Contemporary 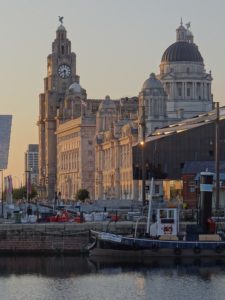 Liverpool recalls its industrial and maritime trade past while pressing forward into the future with cultural and economic progress.

Since the decline of its maritime shipping power, Liverpool has become better-known as a source of popular rock music and successful football clubs. The Beatles, the best-selling band in pop music history and one of the most influential groups of the rock era, hailed from Liverpool. These exemplars of the Merseybeat sound famously played early, pre-fame gigs at the Cavern Club, one of many sites associated with the band that form the nexus of a popular Beatles-centric tourist trade in Liverpool.

Liverpool F.C. is the city’s world-renowned football club, winners of 27 domestic league titles, 5 European Cups, and numerous other trophies. Playing their home games at the legendary Anfield, Liverpool contend with city rivals Everton (who play nearby at Goodison Park) in the Merseyside Derby.

Liverpool is also home to many top museums, world-class art galleries, historic buildings, and performing arts venues. Liverpool John Lennon Airport, named after the late Beatle (the first airport named after an individual in Britain), is the city’s primary air transport hub, while Liverpool Lime Street Station is the largest mainline rail terminal in the city.

Please feel free to contact Global Alliance Worldwide Chauffeured Services for all of your transportation needs in Liverpool, UK.