At Global Alliance, we take the “Worldwide” in our company name very seriously. We pride ourselves in offering premium limousine services to our clientele not only in our home base of Toronto but around the globe. Through our sophisticated network of trusted worldwide affiliates, Global Alliance can provide professional chauffeured services in hundreds of international cities. We will discuss many of the major worldwide destinations served via our affiliate network on this blog. Today we visit the capital and largest city of the state of Indiana, Indianapolis.

Indianapolis is the second-largest city proper in the Midwest after Chicago, with a population of over 850,000 in the city (14th most populous in the United States) and over 2 million in the metropolitan area (34th most populous metro area in the U.S.). Founded in 1821, Indianapolis was planned as the new state capital city for Indiana, which it officially became in 1825, followed by its incorporation as a city in 1847. From its earliest days, Indianapolis was a major transportation and logistics hub, a role which greatly expanded during and after the American Civil War (today, Indianapolis is a day’s drive from around 70 percent of the national population, cinching its logistics and transport hub status). 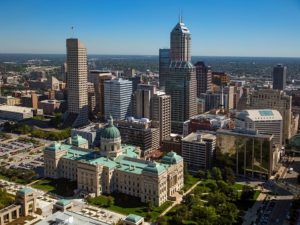 Growing in size, population, and prosperity through the turn of the 20th Century, Indianapolis rivalled Detroit in the early days of auto manufacturing, was a major union organizing centre, and later became a key centre for motorsports (it has hosted America’s most prestigious auto race, the Indianapolis 500, since 1911) and amateur sports.

In addition to Indianapolis’ extensive highway and rail connections, Indianapolis International Airport is a major air travel hub, with 8 million passengers using it annually, making it the state’s busiest airport.

Please feel free to contact Global Alliance Worldwide Chauffeured Services for all of your transportation needs in Indianapolis, Indiana.