At Global Alliance, we take the “Worldwide” in our company name very seriously. We pride ourselves in offering premium limousine services to our clientele not only in our home base of Toronto but around the globe. Through our sophisticated network of trusted worldwide affiliates, Global Alliance can provide professional chauffeured services in hundreds of international cities. We will discuss many of the major worldwide destinations served via our affiliate network on this blog. Our destination today is one of Germany’s largest cities and Europe’s key financial hub, Frankfurt.

Technically called Frankfurt am Main (the Main River runs through the city), the fifth-largest city in Germany is also its second-largest metropolitan area, with over 5 million inhabitants in the larger region. Inhabited for centuries by Germanic tribes, Frankfurt grew in importance during the millennium-long Holy Roman Empire. It was a major trading centre for centuries and the coronation site for Holy Roman Emperor for over two hundred years between the 16th and 18th centuries. After suffering serious damage from bombing during World War II, Frankfurt underwent extensive reconstruction and remarkable economic expansion in the post-war years. 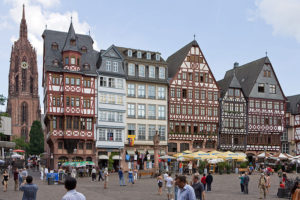 to over 200 banking companies, including many of the world’s largest. Its stock exchange is also one of the world’s largest, dating back to policies fixing exchange rates in the 1500s. Its international airport is one of the busiest for passenger traffic in the world, and rivals London Heathrow for the title Europe’s main air transport hub (it is also the main hub for Lufthansa, Germany’s largest airline). Its skyline of office towers and other skyscrapers is one of the most modern and impressive in Europe, earning the business district the portmanteau nickname of Mainhattan (combining a reference to New York City’s famous skyline with Frankfurt’s historic river).

Frankfurt is known for its major annual fairs, a distinction dating back to the Holy Roman Empire days when Frankfurt was a free city. Its trade fair, Messe Frankfurt, is one of the world’s largest, and the Frankfurt Motor Show and Frankfurt Book Fair are also the largest events of their kinds in the world. Permanent attractions include the Altstadt, Frankfurt’s extensively rebuilt historic centre, the main Cathedral with its 95-metre-high spire, and the Alte Oper, the city’s former opera house which now serves as a concert hall. In addition to its international airport, rail service in the city runs through Frankfurt Central Station.

Please feel free to contact Global Alliance Worldwide Chauffeured Services for all of your transportation needs in Frankfurt, Germany.