At Global Alliance, we take the “Worldwide” in our company name very seriously. We pride ourselves in offering premium limousine services to our clientele not only in our home base of Toronto but around the globe. Through our sophisticated network of trusted worldwide affiliates, Global Alliance can provide professional chauffeured services in hundreds of international cities. We will discuss many of the major worldwide destinations served via our affiliate network on this blog. We travel to the Emerald Isle today, to visit Ireland’s venerable capital of Dublin.

Ireland’s largest city as well as its capital, Dublin has an urban population of over 1.3 million residents, with just below 2 million people in the Greater Dublin Area. The Dublin region has been settled since pre-history, though the first important and lasting settlement bearing the name of Dublin (from the Irish word for a dark tidal pool) dates to 988 and was founded by the Vikings. Now based around the mouth of the River Liffey on Ireland’s east coast, Dublin has remained Ireland’s primary political and cultural centre since the 12th Century, when the island was invaded and conquered by Normans from England. This inaugurated centuries of conquests, political influence, and direct rule of Ireland from Britain that lasted until the country’s independence (and contentious partition with British-controlled Northern Ireland) in the early 20th Century.

The seat of British rule in the country until 1922 was Dublin Castle, a historic fortification (and adjacent gardens) in the city with some architectural features dating back to the 13th Century. It remains a major landmark and popular visitor attraction today. Other important sites in Dublin include 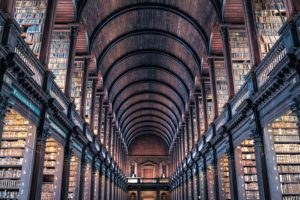 historic Trinity College, with its magnificent old library displaying the 1200-year-old Book of Kells; the National Museum of Ireland, comprising multiple sites in the city covering multiple strands of Ireland’s history; the picturesque Ha’penny Bridge over the Rivey Liffey; the modern Spire of Dublin, a nearly 400-foot stainless-steel spire also known as the Monument of Light; and many more historic churches, mansions, and government buildings, as well as green spaces such as Phoenix Park, Herbert Park, and St. Stephen’s Green.

Economically, Dublin is Ireland’s driving engine, a continually-growing economic powerhouse and one of Europe’s most prosperous cities since the Celtic Tiger period in the 2000s. Although industries such as the historic Guinness Brewery at St. James’s Gate are popular tourist attractions, modern business sectors such as finance, technology, and medical research and services increasingly dominate Dublin’s economy. Culturally, Dublin is known for its youthful population, preponderance of pubs and nightclubs (especially in the Temple Bar area), lively musical scene, and august literary and theatrical heritage. Dublin Airport is the city’s main air travel hub, with over 27 million passengers moving through it annually, at most recent count.

Please feel free to contact Global Alliance Worldwide Chauffeured Services for all of your transportation needs in Dublin, Ireland.