At Global Alliance, we take the “Worldwide” in our company name very seriously. We pride ourselves in offering premium limousine services to our clientele not only in our home base of Toronto but around the globe. Through our sophisticated network of trusted worldwide affiliates, Global Alliance can provide professional chauffeured services in hundreds of international cities. We will discuss many of the major worldwide destinations served via our affiliate network on this blog. Today’s destination is Denmark’s charming capital and largest city, Copenhagen.

With a metropolitan population of around 2 million residents, Copenhagen is the most populous city in the nation of Denmark and the second-largest city in Scandinavia after Stockholm, Sweden. Located on the eastern shore of the island of Zealand, Copenhagen is part of the larger Øresund region (with a population of approximately 4 million people), which includes surrounding Danish settlements as well as the adjacent Swedish region of Scania, including the city of Malmö. Copenhagen and Malmö are connected via the Øresund Bridge which spans the strait of sea between the two countries.

From printed sources and archaeological evidence, Copenhagen is known to have been inhabited since the Viking Age in the 11th Century. Likely a seasonally-inhabited fishing and trading colony at first, Copenhagen became a more fixed and permanent settlement in the 13th Century. Becoming the capital of the burgeoning Danish state in the early 15th Century, many of the city’s historic landmarks were build in this period, including Copenhagen Castle (which was demolished to make way for the royal Christiansborg Palace in 1731) and the University of Copenhagen (the country’s oldest, it dates to 1479). 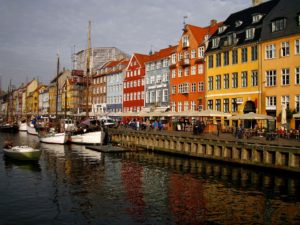 Growing in importance, Copenhagen saw a fruitful period of cultural and civic development in the early 1800s which is often called the Danish Golden Age.

Now a cosmopolitan modern city, Copenhagen consistently ranks near the top of urban quality of life rankings. The city is Denmark’s administrative and government centre as well as its economic and financial engine. Its distinctive districts include picturesque former canal-bissected harbours such as Christianshavn and Nyhavn, and 18th-century Frederiksstaden, with its elegant palaces, mansions, churches, and boulevards.

The aforementioned Christiansborg Palace, which now houses the Danish Parliament, Prime Minister’s offices, and the nation’s Supreme Court as well as historic sites from its time as a royal palace, dominates the small island of Slotsholmen. The popular amusement park Tivoli Gardens lies in the neighbourhood of Vesterbro. More recent notable landmarks of modern architecture in the city include the Black Diamond National Library and the $500 million Copenhagen Opera House. Copenhagen Airport in Kastrup is the largest airport in Scandinavia, handling nearly 30 million passengers per year at the most recent count.

Please feel free to contact Global Alliance Worldwide Chauffeured Services for all of your transportation needs in Copenhagen, Denmark.