At Global Alliance, we take the “Worldwide” in our company name very seriously. We pride ourselves in offering premium limousine services to our clientele not only in our home base of Toronto but around the globe. Through our sophisticated network of trusted worldwide affiliates, Global Alliance can provide professional chauffeured services in hundreds of international cities. We will discuss many of the major worldwide destinations served via our affiliate network on this blog. Today, in the second part of a three-part series on Ohio’s major cities, we visit the state’s capital and largest city, Columbus.

With a city population of approximately 850,000, Columbus is not only Ohio’s largest city but the 15th-largest city proper in the United States, as well as the fourth-largest state capital. Its metropolitan population of over 2 million inhabitants places it third among Ohio’s largest metro areas. Ohio’s capital since 1816, a mere four years after its 1812 founding, Columbus is also home to the main campus of Ohio State University (founded in 1870), the state’s largest university and consistently among the five largest post-secondary institutions in the U.S. by enrollment.

Columbus, named after explorer Christopher Columbus, was built near the confluence of the Scioto and Olentangy rivers, where the city’s downtown is now located. The city grew through the 19th Century as transportation links connected it to the rest of the young American nation, from the National Road to the Ohio and Erie Canal to the railroads. A succession of building booms, expansion, and annexation of neighbourhood communities through the 20th Century made Columbus Ohio’s largest city by the 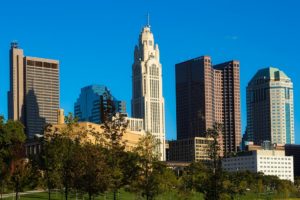 Consistently rated as one of the top American cities for business, Columbus is home to the headquarters of five Fortune 500 companies as well as many other nationally-recognized corporations. Known as the Arch City for the steel arches (formerly streetcar infrastructure) along central High Street, Columbus’ architectural landmarks include the State Capitol and Art Deco buildings such as the Ohio Judicial Center and the 47-storey LeVeque Tower downtown. A scale replica of Christopher Columbus’ flagship on his famous 1492 voyage to America, the Santa Maria, is moored on the downtown riverfront.

Cultural and tourist attractions in the city include the Columbus Museum of Art, the Center of Science and Industry Columbus, the Ohio History Connection (including its flagship museum the Ohio History Center and the Civil War-era replica settlement Ohio Village), historic downtown performing arts centers such as the Palace Theatre, Ohio Theatre, and Southern Theatre, and the world-renowned Columbus Zoo and Aquarium, recently ranked as the best zoo in the United States. Columbus is also an active sports town, highlighted by the Ohio State Buckeyes, one of the top athletic programs in the country in many sports, including college football (the Buckeyes football team plays its home games at Ohio Stadium, one of the largest stadiums in the U.S. and indeed the world). Columbus is also home to professional franchises the Columbus Blue Jackets of the National Hockey League and the Columbus Crew of Major League Soccer.

Columbus’ primary air transport hub is John Glenn International Airport on the east side of the city. It is also well-connected to regional and national highway and rail networks.

Please feel free to contact Global Alliance Worldwide Chauffeured Services for all of your transportation needs in Columbus, Ohio.