At Global Alliance, we take the “Worldwide” in our company name very seriously. We pride ourselves in offering premium limousine services to our clientele not only in our home base of Toronto but around the globe. Through our sophisticated network of trusted worldwide affiliates, Global Alliance can provide professional chauffeured services in hundreds of international cities. We will discuss many of the major worldwide destinations served via our affiliate network on this blog. Today we begin a three-part tour of the major cities of Ohio with Cleveland, the city on the southern shore of Lake Erie.

Cleveland was founded in 1796 on the banks of the Cuyahoga River near where it drains into Lake Erie, and named after General Moses Cleaveland, leader of the founding surveying expedition. Incorporated as a village is 1814 and as a city in 1836, Cleveland grew rapidly after the construction and opening of the Ohio and Erie Canal, as well as the erection of rail links. These transportation advantages led to considerable commercial and industrial growth, with particular focus on manufacturing. Cleveland’s status as an economic powerhouse on the Great Lakes was a major factor in its becoming the fifth-largest city in the United States by 1920 and nearing 1 million inhabitants by the end of the 1940s. Although the city’s economic and population growth slowed in following decades, Cleveland has 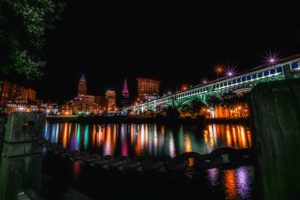 Now home to many corporate headquarters and particularly top medical institutions and companies, Cleveland is an emerging 21st Century global city. It is strong in arts and culture, with Playhouse Square Center constituting the second-largest performing arts complex in the United States after New York’s Lincoln Center, and the Cleveland Orchestra considered one of the country’s top five symphony orchestras. Its major museums include the Cleveland Museum of Art and the Rock n’ Roll Hall of Fame. The West Side Market is a popular destination for foodies in the Ohio City neighbourhood.

Cleveland is also a rabid sports town that has enjoyed recent success after long championship-less droughts for its professional franchises. The Cleveland Cavaliers, featuring NBA superstar (and Akron native) LeBron James, are the defending champs of the National Basketball Association and play their home games at Quicken Loans Arena in downtown. The Cleveland Indians of Major League Baseball (home stadium: Progressive Field) and the Cleveland Browns of the National Football League (home stadium: FirstEnergy Stadium) have also won multiple championships, though not for many decades.

Please feel free to contact Global Alliance Worldwide Chauffeured Services for all of your transportation needs in Cleveland, Ohio.