At Global Alliance, we take the “Worldwide” in our company name very seriously. We pride ourselves in offering premium limousine services to our clientele not only in our home base of Toronto but around the globe. Through our sophisticated network of trusted worldwide affiliates, Global Alliance can provide professional chauffeured services in hundreds of international cities. We will discuss many of the major worldwide destinations served via our affiliate network on this blog. For the final entry in our three-part series on the cities of the Buckeye State of Ohio, we shall visit the metropolis in the south of the state, Cincinnati.

Cincinnati is Ohio’s third-largest city with a city population just below 300,000 and rivals Cleveland for the state’s largest metropolitan area with a metro population of over 2 million inhabitants. Although the city itself is located in Ohio, up to a quarter of Cincinnati’s metropolitan population is located in the neighbouring states of Kentucky and Indiana. Founded at the confluence of the Licking and Ohio rivers in 1788, Cincinnati became a fast-growing boomtown in the 19th Century and rivaled the country’s major Eastern Seaboard cities for size and economic robustness in the middle decades of the 19th 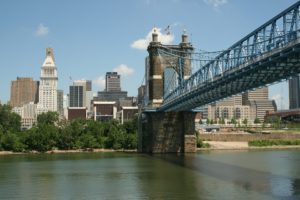 Century. Although Cincinnati’s population has declined following its peak of half a million residents in the mid-20th Century, the city now has the fastest-growing economy in the Midwest and is the headquarters for several Fortune 500 companies.

Cincinnati’s downtown, recently the location of much renovation and revitalization, is centered on Fountain Square and features numerous edifices of historic and architectural interest. An important stop on the Underground Railroad during the period of slavery, Cincinnati commemorates the many African-Americans who escaped bondage into the free state of Ohio at the National Underground Railroad Freedom Center. The Cincinnati Zoo is the second-oldest zoo in the United States.

Cincinnati’s major-league professional sports teams are the Cincinnati Reds of Major League Baseball and the Cincinnati Bengals of the National Football League. College sports, particular college basketball, is also a major sports focus in Cincinnati, with the teams of local schools the University of Cincinnati (nicknamed the Bearcats) and Xavier University (nicknamed the Musketeers) carrying on a fierce rivalry and achieving strong recent success.

In addition to a freeway and highway network and rail connections, Cincinnati is served transportation-wise by the Cincinnati/Northern Kentucky International Airport, a major airport located across the river in Kentucky.

Please feel free to contact Global Alliance Worldwide Chauffeured Services for all of your transportation needs in Cincinnati, Ohio.