At Global Alliance, we take the “Worldwide” in our company name very seriously. We pride ourselves in offering premium limousine services to our clientele not only in our home base of Toronto but around the globe. Through our sophisticated network of trusted worldwide affiliates, Global Alliance can provide professional chauffeured services in hundreds of international cities. We will discuss many of the major worldwide destinations served via our affiliate network on this blog. Our destination today is the charming capital of Hungary, Budapest.

One of the European Union’s largest population centres, Budapest counts over 3 million inhabitants in its wider metropolitan area, which comprises a third of Hungary’s total population. A robust economy and rich culture and history has made Budapest a popular destination for tourists, and its 4-million-plus visitors per year more than doubles its permanent population. It is frequently ranked among the world’s most beautiful cities, as well as one of the most livable cities in the Central and Eastern region of Europe.

The earliest settlement along the Danube River in the vicinity of modern Budapest was founded by the Celts, then occupied by the Romans, who made it a regional capital city. The ancestors of modern Hungarians, the Magyars, moved in during the 800s, and the separate cities of Buda and Pest grew up on opposite banks of the Danube during the Middle Ages and later the Renaissance under the Hungarian kings. Invasions by the Tatars and Mongols and a century and a half of Ottoman rule didn’t much slow the cities’ development. Buda and Pest were united into the city of Budapest in 1873, and the city became a key centre of the Austro-Hungarian Empire. Further impacted by World War II and decades of Soviet occupation, Budapest has emerged over the last quarter-century as a dynamic, vibrant, and successful urban metropolis. 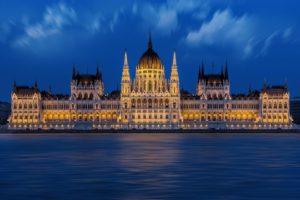 Budapest’s two halves are connected by a series of bridges, the oldest and most famous of which is the Chain Bridge. The central districts of Budapest along the Danube and comprising the old city are a UNESCO World Heritage Site. Major landmarks include the crenelated Neo-Gothic Hungarian Parliament Buildings along the banks of the Danube, historic churches such as Matthias, Saint Stephen’s, and Saint Elisabeth, numerous museums such as the Museum of Fine Arts and the National Museum, and the ruins of the Roman city of Aquincum. Budapest also boasts around 125 thermal springs, providing around 70 million litres of hot water a day which was enjoyed by the Romans and Turks and continues to provide relaxation at spas and baths today. Budapest is also a bustling modern business centre and transportation hub in Central and Eastern Europe.

Please feel free to contact Global Alliance Worldwide Chauffeured Services for all of your transportation needs in Budapest, Hungary.