At Global Alliance, we take the “Worldwide” in our company name very seriously. We pride ourselves in offering premium limousine services to our clientele not only in our home base of Toronto but around the globe. Through our sophisticated network of trusted worldwide affiliates, Global Alliance can provide professional chauffeured services in hundreds of international cities. We will discuss many of the major worldwide destinations served via our affiliate network on this blog. Today we remain in the United Kingdom and make a stop in the city of Birmingham.

Often referred to as the UK’s “Second City”, Birmingham’s city population is over 1 million residents, with more than 3 million inhabitants in the metropolitan area, making it the second largest city and metro in the UK after London. Located in the West Midlands, Birmingham was largely uninhabited forest until settled in the Anglo-Saxon period in the 6th and 7th centuries. Later the site of a manor house and then a medieval market town, Birmingham grew to be Warwickshire’s largest towns and an important merchant and later manufacturing center. Blossoming culturally and politically in the 18th Century and then growing rapidly during the Industrial Revolution in the 19th Century, Birmingham remained a prosperous provincial city into the 1970s. A period of post-industrial change and upheaval followed, taking Birmingham into the 21st Century as a modern British city. 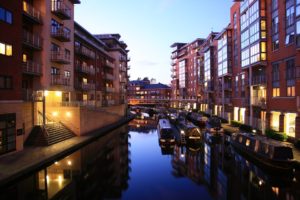 Birmingham’s landmarks include Council House in Victoria Square, the headquarters of the City Council, and historic Colmore Row, the city’s traditionally prestigious business address. The neoclassical Birmingham Town Hall, dating to the 1830s, was refurbished in the 2000s for use as a concert hall. Other cultural attractions include the performing arts venue the Birmingham Hippodrome, the Birmingham Museum & Art Gallery and Barber Institute of Fine Arts, and Thinktank, Birmingham’s science museum. Birmingham has also been a major center for popular music since the 1960s, home to numerous popular artists and important as an origin point of the heavy metal genre of rock music.

Birmingham’s major football clubs are Aston Villa (who have won seven league titles and one European Cup) and Birmingham City; the often-annual games between the two clubs are major local sporting events known as the Second City Derby. Other major clubs in the outskirts of the city and the wider West Midlands area include West Bromwich Albion and Wolverhampton Wanderers. Birmingham is the host city for the 2022 Commonwealth Games. A hub of rail, road, and canal networks, Birmingham also has the seventh-busiest airport in the UK.

Please feel free to contact Global Alliance Worldwide Chauffeured Services for all of your transportation needs in Birmingham, UK.