At Global Alliance, we take the “Worldwide” in our company name very seriously. We pride ourselves in offering premium limousine services to our clientele not only in our home base of Toronto but around the globe. Through our sophisticated network of trusted worldwide affiliates, Global Alliance can provide professional chauffeured services in hundreds of international cities. We will discuss many of the major worldwide destinations served via our affiliate network on this blog. We continue to travel through Spain today, stopping by the great city of the Basque Country, Bilbao.

With a city population of over 340,000 and a metro population nearing 1 million, Bilbao is one northern Spain’s largest urban centres and the fifth-largest metropolitan region in the country. Located south of the Bay of Biscay and the Bilbao estuary, the city is surrounded by small mountain ranges, and thus defined by the hills and the sea like much of Basque Country.

Founded in the 14th Century, much later than many of the cities of southern Spain, Bilbao soon 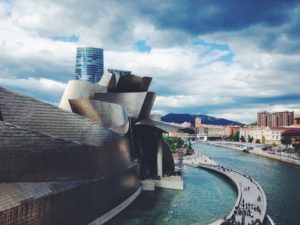 developed into the key settlement in the Bay of Biscay area (and later capital of the province of Biscay), with its port becoming one of Spain’s most important by the early 16th Century. Growing further into the economic engine of the Basque Country through to the mid-20th Century, deindustrialization hit Bilbao hard, necessitating a highly successful urban renewal effort beginning in the 1990s.

The highlight of this effort is the city’s architectural and cultural jewel, the Guggenheim Museum Bilbao. Designed by Canadian architect Frank Gehry, built on the bank of the Nervion River in the old port district, and opened in 1997, the Guggenheim Bilbao, as well as being a large and prestigious contemporary art museum, is an architectural landmark of the contemporary style and one of the most famous and widely admired recently-constructed buildings in the world. It has been vital in making Bilbao one of Spain’s top tourist destinations.

Other landmarks and attractions in Bilbao include the Euskalduna Conference Centre and Concert Hall, the Zubizuri pedestrian bridge across the river (designed by Spanish architect Santiago Calatrava) and the Casco Viejo, Bilbao’s old town with its historic churches (include Bilbao Santiago Cathedral), Ribera Market, and Arriaga Theatre. Celebrated local football club Athletic Bilbao, a focal point for city pride and wider Basque nationalism, plays its home games at the new 53,000-seat-capacity San Mames Stadium next to the Nervion River.

Bilbao Airport is the city’s main air transportation hub, the busiest airport in the Basque Country and indeed along the whole northern coast of Spain.

Please feel free to contact Global Alliance Worldwide Chauffeured Services for all of your transportation needs in Bilbao, Spain.