At Global Alliance, we take the “Worldwide” in our company name very seriously. We pride ourselves in offering premium limousine services to our clientele not only in our home base of Toronto but around the globe. Through our sophisticated network of trusted worldwide affiliates, Global Alliance can provide professional chauffeured services in hundreds of international cities. We will discuss many of the major worldwide destinations served via our affiliate network on this blog. Maryland’s largest city is our stop today: the historic port city of Baltimore.

In addition to being Maryland’s largest city, Baltimore is ranked in the top 30 largest cities in the United States and is among the top 25 most populous metropolitan areas in the country as well, with a metro population of over 2 million residents.

The Baltimore area was first settled by the English in 1661 and named for an Irish lord who was a founder of Maryland. Sparse early settlements soon coalesced around the Port of Baltimore (now based around Locust Point) in the early 18th Century. As an export site for tobacco and import and processing site for sugar from the Caribbean, Baltimore grew rapidly through the 1700s after the official founding of the town in 1729. Baltimore played a key role in the Revolutionary War and the War of 1812, and was the setting for the writing of “The Star Spangled Banner”, later made the American national anthem, by Francis Scott Key during a battle of the later conflict.

Baltimore grew as a major shipping and manufacturing centre throughout the 19th Century, and despite struggles in the 1900s and early 2000s has emerged as a vibrant modern city. The Port of Baltimore remains the city’s core economic engine, as one of the busiest shipping ports in the country as well as a port for passenger cruise ship traffic. Johns Hopkins University and its connected Hospital are also major employers in the Baltimore region. 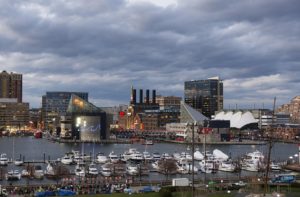 Known as the Monumental City, Baltimore is home to many public monuments, historic buildings and sites, and notable architectural styles. Its Inner Harbor features many attractions for visitors, including the National Aquarium (one of the largest in the nation) and numerous historic sailing and steam ships. Once a beer-making giant, Baltimore is still home to many historic breweries and beer-related museums.

Baltimore is a passionate sports city despite only being home to two major league teams. Major League Baseball’s Baltimore Orioles, who play to home crowds at Oriole Park at Camden Yards, have won three World Series titles and have a storied history going back well over a century. The Baltimore Ravens of the National Football League, who moved to the city in 1996 after the city’s original pro football franchise, the Colts, left for Indianapolis in 1984, are also very popular. Named after Baltimorean literary great Edgar Allan Poe’s famous poem The Raven, the Ravens have won two Super Bowl championships and play their home games at the 71,000-seat-capacity M&T Bank Stadium.

Please feel free to contact Global Alliance Worldwide Chauffeured Services for all of your transportation needs in Baltimore, Maryland.