At Global Alliance, we take the “Worldwide” in our company name very seriously. We pride ourselves in offering premium limousine services to our clientele not only in our home base of Toronto but around the globe. Through our sophisticated network of trusted worldwide affiliates, Global Alliance can provide professional chauffeured services in hundreds of international cities. We will discuss many of the major worldwide destinations served via our affiliate network on this blog. Today we visit one of the jewels of the Caribbean, the islands of the Bahamas.

The Bahamas is an independent commonwealth and a former British colony. It is an archipelagic state, its territory consisting of over 700 islands spread over 470,000 square kilometres of ocean and land. The population of the Bahamas is just below 400,000, two-thirds of which resides in its capital and largest city, Nassau, located on the island of New Providence.

Originally inhabited by the indigenous Lucayan people, Bahamas was the landing berth of explorer Christopher Columbus’ historic expedition in 1492. Columbus and the Spanish who followed him relocated the Lucayan natives to other colonies as slaves, leaving the Bahamas mostly uninhabited until the mid-17th Century, when English colonists from Bermuda settled in the archipelago. A British Crown colony from 1718 (which ended its status as a notorious haven for pirates, including the infamous Blackbeard), the Bahamas was soon inhabited by British colonists, American Loyalists after the Revolutionary War, and a majority of Africans, both slaves and freedmen. People of African descent today constitute 90% of the population of the Bahamas, which has been 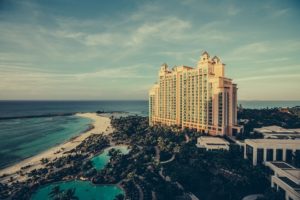 independent of Britain since 1973.

Now one of the wealthiest countries in the Americas, the Bahamanian economy is dominated by tourism (which provides over 60% of the national GDP), with finance also accounting for a considerable portion of its economic output. The tourism business is concentrated around the largest cities of the Bahamas, capital city Nassau and Freeport on the island of Grand Bahama (the western tip of this island is only 55 nautical miles from the coast of Florida). Many of the top resorts and beaches in the Bahamas are concentrated in or near these cities, and Nassau is a frequent port of call for cruise ships.

Please feel free to contact Global Alliance Worldwide Chauffeured Services for all of your ground transportation needs in the Bahamas.