At Global Alliance, we take the “Worldwide” in our company name very seriously. We pride ourselves in offering premium limousine services to our clientele not only in our home base of Toronto but around the globe. Through our sophisticated network of trusted worldwide affiliates, Global Alliance can provide professional chauffeured services in hundreds of international cities. We will discuss many of the major worldwide destinations served via our affiliate network on this blog. Today, we will visit the great northern natural wonders of the U.S. state of Alaska.

Located to the northwest of the Canadian province of British Columbia and the Yukon Territory, Alaska is the northernmost state in the U.S. It is the largest state in the Union by land area but the third-lowest in population with the lowest population density; three-quarters of a million inhabitants are spread over 1.7 million square kilometres. Alaska is also the second newest state in the nation; it was added to the Union in 1959, only months before the newest state, Hawaii, achieved statehood in the same year. Along with Hawaii, Alaska is one of only 2 American states that are not geographically contiguous with the so-called “Lower 48” continental states. Surrounded on three sides by the Arctic and Pacific Oceans, Alaska has a longer coastline than all other states combined.

Originally settled by indigenous peoples, Alaska was later colonized by Russians crossing the Bering Strait in the 18th Century. The Russian settlement was not successful or very populous, and did not discourage Russia from selling Alaska to the United States in 1867, after which point it was a U.S. territory for nearly a century until statehood. The completion of the Alaska Highway, discovery of oil, and development of the pipeline system has brought 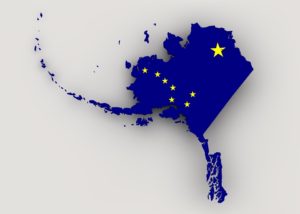 revenues and growth to Alaska through the 20th Century.

The majority of the territory of Alaska is uninhabited and remote wilderness, much of it of notable natural beauty and inhabited by large wild animal populations, including caribou and grizzly bears. Stunning landscapes and outdoor activities such as fishing, hunting, hiking, trekking, snowmobiling, and mountain climbing therefore account for much of the tourist traffic in Alaska. Denali (formerly known as Mount McKinley), located in its own National Park and Preserve, is the highest mountain peak in North America, attracting top alpinists from around the world. Cruises along the dramatic, iceberg-strewn Alaskan coast are a popular and easy way to see some of the state’s wonders.

Although Alaska is famous for its natural landscapes, there are also many cities and settlements of some size. Anchorage is the largest city, with a population of nearly 300,000 (around 40% of the state population). Many of the state’s larger cultural institutions are based there, and its downtown is the starting point for the state’s famous Iditarod Trail Sled Dog Race. Its airport, Anchorage International, is the state’s primary air transport hub, a major air freight gateway, and a common refueling point for international flights. Other larger centres include the state capital of Juneau, Fairbanks, Badger, and Sitka, the former territorial capital and historic core of the old Russian-American colony.

Please feel free to contact Global Alliance Worldwide Chauffeured Services for all of your transportation needs in the State of Alaska. Car service is available between larger centres like Anchorage and Alaskan cruise departure docks, with hardy yet luxurious vehicles suited to the elements and additional luggage trailers if required.