Global Alliance Worldwide Chauffeured Services operates in the Greater Toronto Area of Southern Ontario, Canada. Although Global Alliance provides services around the world through our network of affiliates, the core of our services are performed in Toronto and its surrounding region. In this continuing feature, we will detail notable locations and communities in the Greater Toronto Area (or GTA) where we often provide limousine service. Today, we travel east of Toronto to the city of Peterborough.

Located approximately 125 kilometres east of Toronto and about 270 km southwest of Ottawa, Peterborough is a city of just over 81,000 inhabitants (121,000 inhabitants in the larger metropolitan area). The Peterborough area was frequented by First Nations peoples and even traversed by French explorer Samuel de Champlain in the early 17th Century, but the first settlement on the Otonabee River – beginning with a small mill operation – dates to 1818.

Early Canadian political leader Peter Robinson, for whom the city is named, founded and planned the settlement beginning in 1825. By 1846, Peterborough has a population of 2000 people, and incorporated as a town in 1850. The historic Peterborough Lift Lock, an important component of the Trent Canal system, was completed in 1904. The longtime home to a General Electric facility (which closed only this year after more than a century in operation), Peterborough was the first town in Canada with electric streetlights, and was once known as “The 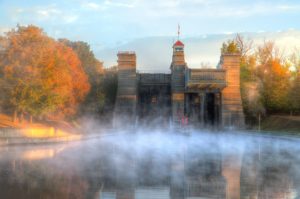 Please feel free to contact Global Alliance Worldwide Chauffeured Services for all of your transportation needs in Peterborough, Ontario.